–this is the third in a series of essays about LoLa’s history in its first decade.

Around the time Anita White and Bob Schmitt proposed starting a neighborhood art crawl, Shirley Neilson approached the Longfellow Community Council (LCC) about holding a multicultural arts festival on East Lake Street.  Shirley recalls Ruth Romano, an LCC staff member, saying, “Why don’t you talk to Anita?  She wants to have an art crawl!  Here’s her number.” In short order, Shirley became part of the group that organized the first LoLa Crawl in 2009–and she and Anita became close friends.

In their own recollections of the first LoLa meeting in Anita’s back yard, Anita and Bob both recall clearly that “Shirley named LoLa.”  Shirley had already come up with the name and acronym in connection with her proposal for the East Lake Street festival.  Happy to join forces instead with the art crawl organizers, Shirley proposed that they call themselves the League of Longfellow Artists.  The dozen or so artists attending that first meeting liked the name and immediately adopted it.  The catchy and memorable acronym thus became part of the LoLa’s success story.

Anyone who knows Shirley will not be surprised that LoLa owes its name to her.  Shirley has a way with words, a knack for the well-turned phrase, a love of verbal humor of all kinds. 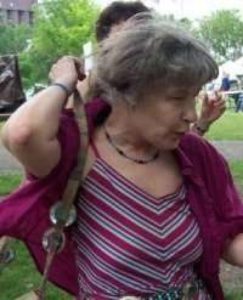 A self-described maker and crafter who uses the business name Art On a Limb, Shirley creates beadwork jewelry, crochets and hand sews bags, makes buttons on a button press, and makes cards.  She works in the crowded but comfortable apartment north of Lake Street that she shares with her husband, Marv.  Shirley’s buttons and cards reflect her verbal wit. Years ago, she and I traded items we’d made (quite a lot of trading goes on among LoLa artists) and I acquired a button that reads: “Lunatic Fringe: Proud Member Since 1968.”  Shirley’s greeting cards include a series of valentines with “To Whom It May Concern” on the outside and such lines as  “Be My One and Only” or “I’ll Always Be Your Love Slave” on the inside.  When I ask Shirley how she came up with the LoLa acronym, she shrugs and says, “Oh, I do that all the time.” As an example, she relates that she once founded a community group called SSPIN—Sowing Seeds of Peace in the Neighborhood.

Shirley enjoyed helping to organize the first LoLa Art Crawl in 2009.  A favorite memory of Shirley’s that captures the excitement of that first year: at a small LoLa meeting, artist Jean Shannon, who was the recording secretary, attempted to take notes during a conversation between Shirley and Anita.  The pair were throwing ideas back and forth so fast, seeming almost to read each other’s minds, that Jean finally said, “Stop!  I haven’t understood a single word you’ve been saying.  You’ve never even finished a sentence!”

At the first Art Crawl, Shirley exhibited and sold her work at Selam Coffee House on Minnehaha Avenue.  Life circumstances then prevented her from participating for several years.  When she returned in 2014, it was to an organization experiencing growing pains and a transition to new leadership.  Shirley was an exhibitor, but had difficulty working with the organizing group that year.  She volunteered some time in 2015 and 2016 with LoLa’s community outreach efforts. To promote both LoLa and Open Arms, a local non-profit group that cooks and delivers meals to people with incapacitating illnesses, she organized an interactive booth at Open Streets-Lake Street.  Participants of all ages decorated shopping bags used to deliver the prepared meals.

These days, Shirley is busy taking care of her family and herself.  She will not be a LoLa exhibitor this year, but she makes time when she can to continue her creative activities.  She compliments the current LoLa steering committee for being well organized and knowing how to delegate responsibilities so that no one is overburdened.  She is glad that LoLa has not become commercialized or professionalized; that it remains volunteer run, non-juried, and community focused. In her view Lola was at its inception, and still is, “about art, and love, and community-building.”

Sally Lieberman is a maker who sews and embroiders. She has been a participating LoLa artist since 2010. As she conducts interviews for this essay series, she feels a deep gratitude to LoLa for bringing many remarkable people into her life. As a member of the steering committee for the 2018 Crawl, Sally is also recruiting volunteers to publicize the LoLa Art Crawl at neighborhood events.  She can be reached at sallylieberman@gmail.com.