–this is the fifth in a series of essays about LoLa’s history in its first decade.

When LoLa started in 2009, Jean Shannon and Lee Love had recently returned to the Twin Cites after ten years in the pottery town of Mashiko, Japan. Lee was awarded a McKnight Residency at Northern Clay Center and they were happy to be back in the neighborhood, but they missed being surrounded by a community of artists. Jean, a printmaker and painter, and Lee, a potter, had found such communities in Japan and, before that, at the Northern Warehouse Artist Cooperative in St. Paul. Just when they were wondering how to find or create such a community in their new home, Jean spotted the Call for Artists that Anita White had placed in the Longfellow Messenger.

Jean and Lee attended the first LoLa art crawl organizing meeting in the summer of 2009. As established professional artists, they both had prior experience putting on art shows, and they volunteered to be officers of LoLa—Lee was co-treasurer and Jean was recording secretary, a position she held for five years. They have participated in the Crawl since the first year, showing their work at their home (Site # 44, 3223 36th Ave S). Their friend Teresa Harsma, who makes handbound books, has joined them most years and will be at the site this year. Since the Crawl opened to guest artists this year for the first time, they will also be joined by Jean’s cousin, photographer Rachel Cain.

While many LoLa artists opt to show their work at neighborhood business sites, “we like having people in our home,” says Lee. “They come in and they kind of say, this is how artists live? Neighbors—you get a lot of people thanking you for welcoming them into your home.”

Over the years, the number of Crawl visitors has fluctuated a bit but has been quite strong overall. Last year, Jean says, between 450 and 500 visitors came to their site, which was probably their highest attendance ever: “the neighborhood response has always been positive.” “When you talk to people,” says Lee, “everybody knows LoLa, and it really colors their perception of our neighborhood, of it being an open, diverse, and welcoming place.” Visitors have told them that they find the LoLa Crawl—with its smaller scale, non-commercial ambience, and relaxed, casual pace—a welcome change from larger local art crawls, such as the St Paul Art Crawl and Art-A-Whirl. A favorite memory of Lee’s dates from the early years when the LoLa Crawl was held at the end of August.  “A woman came with her little child. They had gone to the State Fair the other day, the day before, and he told his mom, ‘this is more fun than the State Fair!’”

As Jean and Lee tell the intertwined stories of their careers as artists, it is clear that each has opened up opportunities for the other in remarkable ways. They met at the Zen Meditation Center of Minnesota in the 1980s. Lee had moved here to study Zen with the Center’s founder, Katagiri Roshi.  Jean was on sabbatical from her job as an English and Humanities teacher.  The first time they met, Jean asked Lee if he was a potter.  Surprised, he replied that he’d always been interested in pottery but hadn’t had an opportunity to study it. On one of their first dates, at Jean’s suggestion, they drove to Stillwater to visit the studio of renowned potter Warren MacKenzie who would eventually introduce Lee to his teacher in Japan, Tatsuzo Shimaoka.

Lee turned his full attention to pottery after Roshi died in 1990. As a participant in the funeral rites, Lee was deeply impressed by the craftsmanship of the handmade, traditional pine coffin, which was made without nails. He felt inspired to make pottery urns that would convey the same sort of respect for the deceased. Instead of taking vows to become a Zen priest, he would practice Zen through pottery. 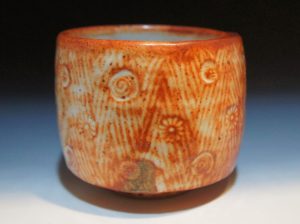 Lee’s pottery is influenced by his Zen experiences—he makes objects to “help people slow down and appreciate life”—and by his interest in Asian cultures, particularly Japanese culture. In 1999, MacKenzie invited Lee to be part of a group of twelve potters to show their work in Japan. At the exhibition, Lee met his future and longtime teacher, Japanese potter Tatsuzo Shimaoka. He and Jean moved to Mashiko, Japan soon afterward so that Lee could complete a three-year apprenticeship under Shimaoka. Because Lee’s mother was Japanese and he was born in Japan (he came to the US as an infant), the couple were able to gain an extended visa and, eventually, permanent residency. After the apprenticeship Lee built a kiln in the traditional style, and the couple stayed to live and work in Mashiko for nearly a decade.

Jean had studied lithography and was already a skilled and talented printmaker when the move to Japan afforded her the opportunity to study Japanese woodblock printing. She has a vivid memory of her first encounter with Japanese prints when she was just five years old. Her family had recently moved to Madison, Wisconsin, and her stepmother brought her along on a visit to the newly built Frank Lloyd Wright Unitarian Society Meeting House. While her stepmother interviewed for a job there, Jean wandered a corridor of breathtaking woodblock prints by Utagawa Hiroshige that Wright had donated to the Unitarian Society. When Lee was doing his apprenticeship in Mashiko, Jean began asking around for a teacher of woodblock printing.  Several people pointed her to a local master printer, Tetsuo Itoi, and a friend arranged for them to meet.  The first encounter was somewhat disappointing. Jean bought photos of her lithographic work for Itoi to look over and “he basically said, ‘very nice, but I don’t teach.’” Instead, he suggested that Jean join a printmaking club at the community center.  When Jean dutifully attended a meeting of this club, there was Itoi among a small group of woodblock enthusiasts. She eventually learned that Itoi was an old-time communist who utterly rejected hierarchical distinctions (“which are the life-blood of Japanese society,” Jean adds), including the teacher-student distinction. So he functioned simply as a member of the club, paying the nominal dues just like everyone else. This did not prevent Jean from learning a great deal from Itoi and becoming an enthusiastic woodblock printmaker in her own right. 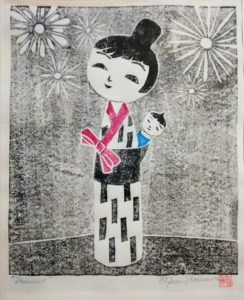 Reflecting on their experiences in LoLa over the past decade, Jean and Lee both emphasize the importance of the community of artists it has created. “LoLa,” Jean says, “provides an entry place for people that are new to showing their creative work.  Just the experience of having someone come to my house, look at my work, and say, ‘Oh, I like your work!’—how affirming that is!” For Lee, who notes that many arts grants require a community component, LoLa has helped him to think creatively about community outreach. He recently purchased a bicycle trailer that he can use to transport a portable raku kiln to events. Because raku firings require only 15-20 minutes, he can invite people to paint a bowl, fire it, and take it home with them. Part of Lee’s State Arts Board Artists Initiative Grant is creating this as a community art event.

Jean and Lee feel an affinity for LoLa’s embrace of makers as well as artists. According to Lee, the distinction Americans make between artist and maker/craftsperson does not hold in Japanese culture. The original meaning of amateur is someone who does an activity for the pure joy of it and not for fame or fortune.  Many Japanese pursue what we might consider a “hobby”, but with greater dedication and seriousness of purpose than “hobby” suggests, alongside a career that supports them financially. As a result, in Japanese society there is a greater awareness and appreciation of pottery and other skilled crafts. “I think of myself as a potter,” Lee says. “I only call myself an artist because other people do.”

The couple sees LoLa as being on a strong footing for the future. “People are in it for the long haul,” says Jean. They approve of LoLa’s current structure, with a core group of people—the steering committee—sharing the major tasks, collecting ideas and feedback from the larger group, and making the tough decisions. It is also important, they emphasize, for this core group to delegate some responsibilities. Doing so enables more LoLa members to learn the various skills involved in putting on an arts event, and to fully benefit from being part of an arts community.