–this is the fourth in a series of essays about LoLa’s history in its first decade.

The LoLa Art Crawl is known for its openness. As an un-juried event it attracts emerging artists, passionate amateurs, makers and creators of all kinds. But from the beginning, an essential element in LoLa’s success has been the participation of some distinguished professional artists. One such artist is Gordon Coons.

For more than two decades, Gordon has been exhibiting and selling his work at juried shows all around the U.S. In June he was at the Eiteljorg Museum’s Indian Market and Festival in Indianapolis. In August he will be at the Santa Fe Indian Art Market; in October, at the Cherokee Art Market in Tulsa. In November he will have a one-person show at the Hopkins Center for the Arts. Gordon’s work hangs in the Minnesota State Capitol and is in the permanent collections of many other institutions. Several galleries around the country have carried his work, and his cards and reproductions can be found at numerous museum gift shops and other businesses, including Birchbark Books and Woodland Indian Crafts in Minneapolis.

But if you’re really lucky? You’re in Minneapolis during the LoLa Art Crawl and can hang out in Gordon’s back yard. There, at Site #49, you can see, purchase, and learn about his latest work.

Gordon does reduction block printing and paints with oils and acrylics in the Woodland Art style. Reduction block printing entails using a single block to print a multicolored image, recarving (reducing) the block after each color is applied. Gordon prefers linoleum blocks because they effectively transfer his brightly colored, heavy inks onto the paper. The Woodland Art style, developed by Ojibwe artists in Canada and the US, takes inspiration from Native artistic traditions such as petroglyphs, birchbark scrolls, and oral narratives. Gordon, who is an enrolled member of the Lac Courte Oreilles Tribe in northern Wisconsin, draws upon clan stories and images in his work. Educating people about the stories is important to him:

I enjoy communicating with people, because you never know what’s going to happen. Part of it is educating people about what they’re looking at, so I have to tell the stories; that’s the reason I do my work. I bring my culture out to different places…. Each of my pictures has a story, it isn’t just a design; I design a story into the image.

The tradition of storytelling has usually happened in the wintertime, when the snow’s on the ground, because people would get together. But I look at it as, you know, if these stories aren’t told all the time, the young kids won’t hear those stories, might not pass them, might not be there for the winter season. So I’m okay with doing it all the time.

Gordon teaches block printing and Woodland Art at schools, libraries, and events in the parks. 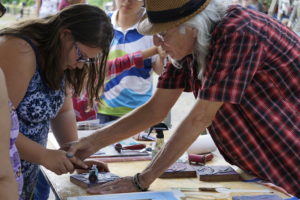 The week we spoke, he was getting ready to demonstrate block printing to children at the Nine Mile Creek Watershed District. He explained that he would bring supplies, including several small carved linoleum blocks; show the children how the prints are made; then invite them to choose a block and a color, and make a print themselves. His life is busy, with lots of details to keep track of; Gordon’s wife, Deb, handles many of the business and outreach aspects.

A member of LoLa since the first meeting at Anita White’s in 2009, Gordon has participated in the Crawl every year. During the Crawl he likes meeting neighbors and having visits from people he knows from different facets of his life. He is glad that the Crawl brings people to the Longfellow neighborhood: “we’re like the hometown effect here in the big city.” One year, he kept track of where the visitors were from, and was surprised that he had people from seven foreign countries. He enjoys seeing the work of other LoLa artists and has found the LoLa organization a useful network for exchanging practical advice on matters such as where to get cards printed and how to produce good digital images.

The biggest thing you want to do is, keep what you promise. Try to do a little bit more, that people don’t expect. You can say you’re going to do this, but add a little bit more to it. That’s what I always try to do, just go a little bit farther…. Make your world bigger.

And ask for help. Look for the next volunteer, not just to carry out the trash or put up the sign, but to do whatever is really the backbone of the whole Art Crawl. People are good, they want to help out.